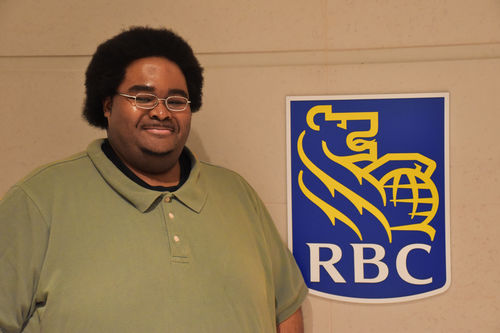 As a Document Retriever for RBC Wealth Management, Marcus works downtown with a stunning view of the city. His co-workers are friendly and encouraging, his work challenges and energizes him, and his managers care about his growth and career development. Marcus has financial and professional goals that he wants to achieve, and most importantly, Marcus believes in himself.

Just over a year ago, Marcus was working over 48 hours a week at a minimum wage job, mentally and physically exhausted. “I had never worked a job where I hadn’t felt stress. I really hit a ceiling; I didn’t know what direction I was going in” he says. He tried a Call Center, but his experience there was so stressful that he had to quit. “You were there because they were short-handed, but they weren’t interested in helping you advance. I reached a point where I thought: There has to be something better.”

When Marcus’ girlfriend mentioned PPL, he was skeptical. His job situation didn’t seem as bad as others and he didn’t want to take a spot from someone who might need it more. But, he sat down with Robert, a PPL Employment Specialist, who said:

“PPL is about helping people take pride in their life. If you're looking for more - then we’re for you.”

Marcus quickly realized PPL's Banking Program wasn’t just about learning from a textbook. “When I first came to PPL, my confidence wasn’t anywhere near where it could have been. But after a week or so, I started to notice that instead of thinking negatively, I would say, ‘I got this - there’s nothing I can’t do.’" PPL gave me the skills to build my confidence while keeping my goals in mind."

After three weeks of training, including motivational talks, resume drafting, financial coaching, skill building, job applications, site visits, and mock interviews, Marcus received two job offers within a month of graduating. He has now worked at RBC for almost a year and was recently promoted within 9 months of starting. His goals are simple but important: Learn everything he can about his new position, and save enough to purchase his own home.

“I honestly didn’t think it was going to be this good, or that it would have such a lasting effect. Having a place where you can come to work and not have to worry, a place with benefits and security and support, it gives you a sense of peace. I’m where I need to be.”