But saying it isn't enough. PPL is committed to dismantling racism. 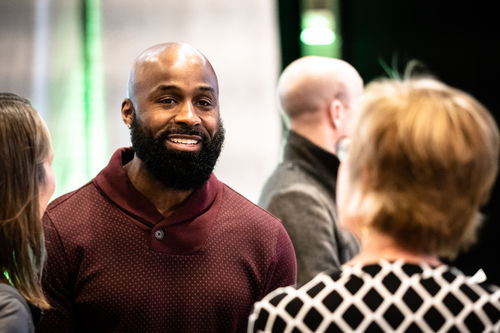 Robert felt trapped. Growing up around crime and drugs, he felt this future was predetermined with no other options. In 1994, Robert was arrested and convicted of second-degree homicide; he would spend the next 15 years behind bars.

Leaving jail was a new beginning, but Robert faced enormous barriers with a criminal record. Basic needs like finding a job and renting an apartment had major restrictions. Robert applied for housing around the Twin Cities but was always denied. He wanted this new beginning to be an opportunity to prove himself, and earn a second chance. But how could he survive when every door was closed to him?

With no options, Robert became homeless.

For a year and a half, he lived in a storage room at the gym where we worked as a personal trainer. "It was shameful living there," said Robert.

"You can't find hope in a box. But it made me strong and it made me grateful."

At the gym, Robert met Leslie, a PPL employee. As they trained together, Robert eventually shared with her that he was homeless. Leslie recommended getting housing through PPL but Robert was skeptical - could a black man with a felony conviction really have a chance?

It turns out he could. In 2013, Robert signed the papers for his own apartment with PPL. "I couldn't believe it. I finally had my own place, a key to open my own door. A place to raise my son. Having a home gave me confidence and it gave me hope."

Today, Robert is full of hope. He continues to live with PPL and work as a personal trainer, and as a fitness coordinator for a nonprofit; there he works with young black men to help them see that hard work and perseverance can pull them through - and that having a support system is critical.

"I want people to know that change is possible for people coming out of prison."

"I can't take back what I've done or change that past, but I can try to use this story to help others and give others hope. Everyone has choices, and it can always get better."